HBH Logistics received the order to transport bar straightening equipment to Mondelange, France. The positioning of several components on their foundations was also planned and completed.

The entire order had the following volumes:

The equipment was loaded on the following vehicles:

HBH employees were present at the site to coordinate the loading and arrival of the heavy packages.

The challenge in this project was the weight and dimensions of the heavy packages.

At the loading site, the route led under a railway bridge and there were only a few centimetres to spare between the packages and the bridge.

At the receiving location, a railway crossing had to be crossed. Permission to cross was received from the authorities at the last minute, after an HBH employee intervened in person at the site. 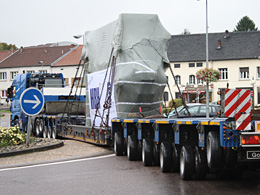 By continuing to use the site, you agree to the use of cookies. More Infos